Superblocks for a small city

Bernie Sanders’ hometown of Burlington, VT is tiny: just 200k people in the metro area. Barcelona, on the other hand, clocks in at 4.7 million. These are wildly-different scales (different everything, really), but when one of my legislators brought up Barcelona’s planned superblocks, I couldn’t help but imagine the radical livability experiment playing out in Burlington.

Superblocks, in a nutshell, are a rearrangement of transportation in a gridded urban area. Take a square of nine city blocks, push all fast, two-way traffic to the perimeter, and make the interior roads waaaaay slower for cars in a series on one-way loops: 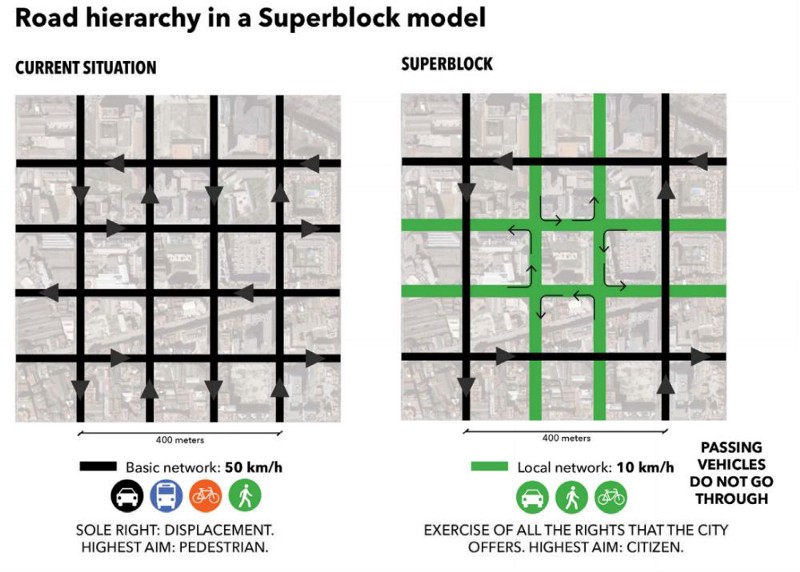 In one move, you flip the car/person hierarchy for two-thirds of the street network; cyclists and pedestrians, even gasp street life are given the room to move and flourish.

This idea is appealing — Burlington has a fabulous central pedestrian mall, great beaches, restaurants and more than our fair share of breweries. But even downtown the city can feel hostile to walkers and bikers. There’s enough gridlock that drivers get easily frustrated. It’s the worst of both worlds in some ways, so I sketched out a design for how superblocks in Burlington might work.

Check out the map here.

Barcelona — particularly in the Eixample district — is a grid-planned city. Burlington — with the exception of a poorly-conceived bout of urban renewal in the 60s — spread out organically in a manner typical of American cities.

Burlington’s layout presents all kinds of basic geometric problems, and only one of the superblocks I sketched (“Lower Slope”) actually conforms to the 9-block clustering pattern. 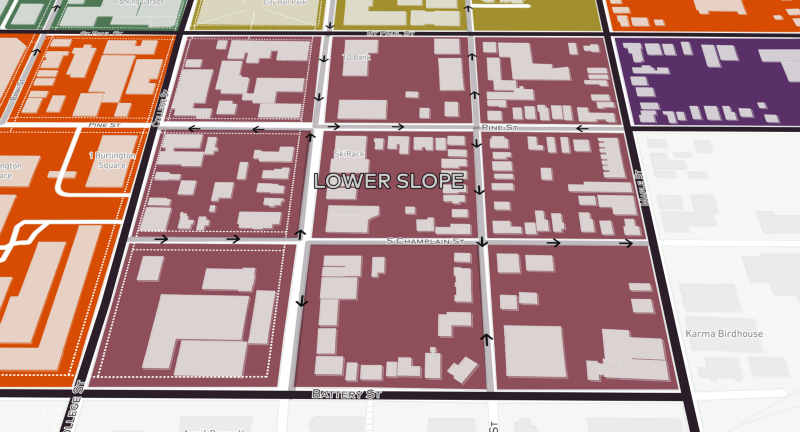 At the bottom of the hill, the one textbook superblock

The rest grapple with discontinuous streets, dead-ends, angled junctions and a huge waterfront (marking perhaps the one similarity with Barcelona). These superblocks required a bit of imagination, and some stretched assumptions about traffic patterns and desireable contiguity. 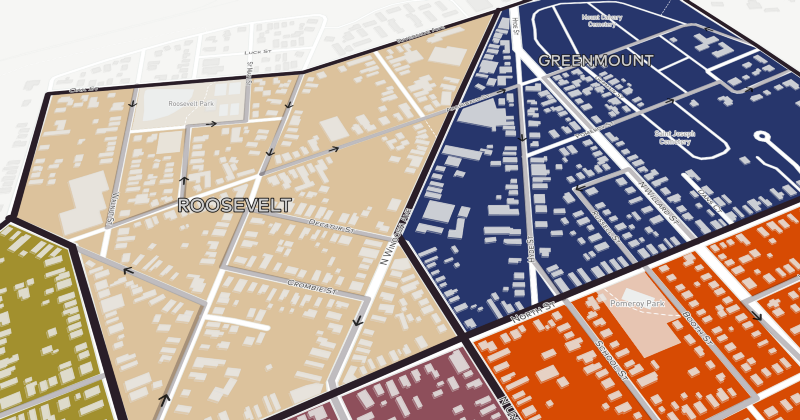 The city has six North/South throughways; this plan reduces that to four. One of five East/West arteries would also become a series of one-way locals (Main street, ironically — but it’s already pretty slow for cars most of the time). These reductions could give way to bikeways, greenbelt parks, streetside cafes — a city at the vaunted “human scale”.

But who is it for?

There are plenty of reasons why a citywide plan like this couldn’t work, and the one that stalls me the most is that — absent a gigantic public transit expansion — this would reconfigure the city for residents at the expense of commuters and tourists. Against the backdrop of tightly-restricted growth and soaring housing costs in desireable cities (Burlington is no exception), this is tough to advocate.

Visitors love this city, partly for the food & drink, partly for the beauty, and partly for the pace. As a good nationalist, I’m reluctant to do anything that prevents them from experiencing it. I’m lucky enough to live here already, and I’d like others to share in my good fortune.

Barcelona’s experience will be instructive; the first phase of superblock implementation is minimally invasive and easily-reversible, so for all its cloaking as a massive urban restructuring, it’ll be simple to react to public input.

Hell, a one-superblock pilot isn’t out of the question for Burlington …

For any urban planners or map nerds who are interested, my Burlington datasets are here:

You can fiddle with them in your browser using geojson.io like so.